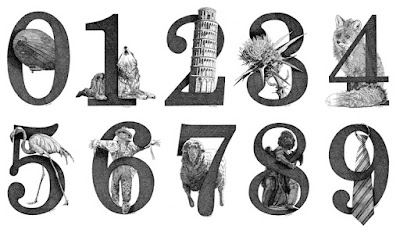 I’ve finished illustrating numbers 0-9. These were as much fun to do as the alphabet. Since I did the numbers based on alliteration (words that start with the same sound are used close together in a phrase or sentence. The sound is usually a consonant), it was a bit harder to decide what images to use. I thought an image of a zeppelin was perfect for zero. They don’t exist anymore and certainly were never zippy. Zeppelins were named after German Count Ferdinand von Zeppelin who designed these steerable balloons with metal “skeletons”. They were used during WWI and routinely made transatlantic flights. Zeppelins were so popular that the spire on the top of the Empire State Building was designed as a docking mast for zeppelins. (That proved to be impractical due to serious updrafts.) Here they are:
0 Zippy Zeppelins
1 Woeful Wolf
2 Tipsy Towers
3 Thriving Thistles
4 Frisky Foxes
5 Flamboyant Flamingos
6 Scrappy Scarecrows
7 Shapely Sheep
8 Ageless Angels
9 Nifty Neckties
Posted by Melissa B. Tubbs 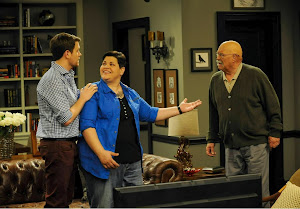 "Patrick's" apartment on Charlie Sheen's show Anger Management on the FX cable channel. Seven of my drawings (the crow and architecture faces) can be seen between actor Barry Corbin on the right and the actress to the left.